Looking at Greek sculpture and where its inspiration come from during 800 to 300 BC you will distinctly notice influence from Near Eastern and Egyptian monumental art, which through centuries evolved into what we today know very well as uniquely Greek art visions. Taking that inspiration Greek artists have taken expertise and excellence in order to capture the human shape like never seen before.

The Greek sculptors were meticulous with idealization of perfection, poise and proportion of human bodies and when looking at their expertize you will find Greek sculptures incredibly well recognized wherever you are and no other civilization could reproduce that since. Through influences and evolution we notice that prior to the eight century BCE artists had an increase in producing small solid pieces in Bronze, ivory and clay too. Without a doubt were wood used as well, however erosion caused the decay of most with very little surviving pieces of the period.

During the time you would find in particular human heads and bronze figures as well as griffins were utilized in the use of attachments for example cauldrons. Large numbers of animal figures especially horses were also completed in that particular time. At Thera the oldest Greek limestone sculptures were found which dated from mid seventh century BCE.

In this same period as the stone sculptures bronze free-standing figures standing on their own bases were made too and during this period ambitious objects like musicians, charioteers and warriors were made. In the early sixth century BCE marble sculptures started appearing around Greece and at this time you also witness’s life-size and monumental statues produced by artists. Often used as grave markers or used in serving Gods these huge statues all had a symbolic service.

There is no more story.

Next Greek Sculpture Methods and Materials 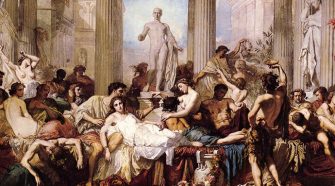