Ancient Greece delivered top artists however some stand out as masters and some of their work have been copied through the ages. During the Archaic period you would find that the art was stylized but during the Classical period the style was more realistic.

Myron worked predominantly in Bronze and he was a pupil of Ageladas another master. This extraordinary sculptor is known for Discobolus that had great rhythm and proportion.

Phidias was one of the sons of Charmides and best known for his brilliant forty foot statue of Athena as well as his ivory and gold Zeus.

High Classical Period – Polyclitus of Argos in the fifth century BC

This brilliant sculpture was known for his Hera statue in chryselephantine which was meant for the Goddess of Argos’ temple. He only did his work in bronze and he is also known for his spear bearer sculpture called Doryphorus.

Lysippus was a Greek metalworker who taught himself through studying Polyclitus’s canon as well as nature and this was what he based his sculptures on. His art is characterised by its slender proportions and lifelike naturalism. Lysisppus’ art is also described as impressionistic art and if you know Alexander the Great sculpture then you should realize that he was the man behind the masterpiece.

As a Temple of the Athena Alea at Tegea architect you would have expected greatness from the main architect behind it, Scopas. Not only did he create it he also added sculptures for the interior and exterior.

Late classical period – Praxiteles of Athens in 400 to 300 BC

Praxiteles was Cephisodotus another great sculptor’s son and from his father he learnt his immense skill using primarily marble, but often bronze too. He loved sculpting male and female gods and men with two of his most famous works the Hermes with Infant Dionysus and also Aphrodite of Knidos.

Next Different Phases of Greek Art 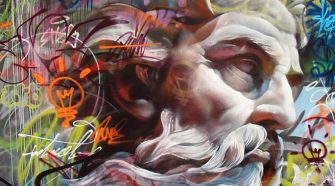