From 16th century BC various phases were evident in Greek art in making it eternally memorable and they were like follows:

Mycenaean Art which was done from around 1550 until 1200 BC on mainland Greece. It is true that Greek and the Mycenaean cultures have been completely different and separate entities, however since they shared the same lands in succession they learnt from one another including tomb and gate building as well as sculpting.

The Mycenaean’s were a diverse culture of extremely great architectural explorers which included Cyclopean beehive toms and masonry but then they were also outstanding potters and goldsmiths. They took pottery from a functional level to extraordinary decorative works of art and moved from bronze to gold. The Mycenaean culture dies after the fall of troy around 1200 and the next period that followed was Sub-Mycenaean or Dark Ages.

Between 1025 until 900 BC was the Proto-Geometric phase where pottery took foreground with wavy lines, black bands and simple shapes. In this stage pots’ shape and creating techniques were refined.

Geometric art followed in the period from 900 to 700 BC and during this period Greek at was simply said outstandingly geometric to say the least. Pottery decoration was no longer simple, but shapes like human and animals also appeared.

This period was followed by the 700 to 480 BC period which produced Archaic art which followed on Orientalizing Phase that was from 735 until 650 BC. Other civilizations influences started creeping into Greek art with elements of Near East evident. During this phase we saw more realistic depictions of monumental and human stone sculptures appearing. It was during this period or phase that both female and male statues were sculpted in the form of smiling, nude and young persons.

It was followed by the period 480 to 323 BC which were the Classical Art phase during which time Athens rose to a prominent city and human statues became proportioned heroically. The phase from 323 until 31BC was the Hellenistic Art phase after the death of Alexander and the crumbling of the Greek empire with Greek sculptors casting marble masterpieces. The flawless magnificence of their portraying of human form as beautiful and flawless as only the Greek could master explains why sculptors imitate the Greek and why the sculptures remain popular to this day.

Next The Most Intense Greek Statues 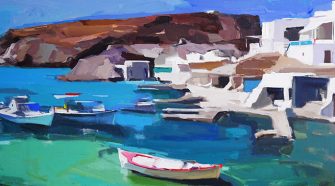